Posted on December 23, 2011 by melanierosedyer

Where have I been?? Well, everywhere really. I can hardly believe I haven’t written on this journal since April . I do apologize for those of you who may keep up with me through this journal. I’ve had a few memorial services to attend and have made several jaunts to the West Coast for those …one out to Portland, OR and another out to San Diego, CA.. As some of you might know, I also own another business with my partner Daniel Cooper http://www.cooperstand.com, a business we started in the recession based on necessity, both for the need for something like this but also of course for income. We won Best of Show at the NAMM show in Nashville our first year in business at the NAMM show, and have recently received our full fledged patent on the unique guitar stand we market called the Cooperstand. We just finished working the Summer NAMM show here in Nashville. It’s a great way to meet a lot other people in the music products business, see some musicians you haven’t seen in awhile and of course make some deals. Below you’ll see a photo of us in the booth meeting with our Singapore, Malaysian, and Indonesian distributor. We worked hard for three days, but it’s always worth it! Here’s an interesting story about us in the Nashville Business Ledger.http://www.nashvilleledger.com/editorial/Article.aspx?id=60068 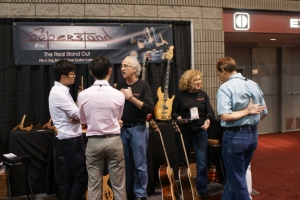 Chances are though, you’re here to catch up on musical comings and goings. Well, all things considered things have been going pretty well as far a radio and exposure for my project which was released in January. The project remains on the Roots Country chart and sometimes even climbs up a few numbers depending upon how many spins I get during that time period. I’m very thrilled to observe that some people are just starting to play the record for the first time. http://rootsmusicreport.com/index.php?page=charts&name=tradcountry And this, all without the help of a publicist, not very many interviews, and barely touring. I dare to hope that it’s based on the quality of the music and the music production.

Tune into my Facebook fan pagehttps://www.facebook.com/melanierosedyerfanpage?ref=hl and you’ll see I’ve been picked up my podcasts and playlists in Italy, France, Germany, the Netherlands, the UK,Belgium, and the USA. The project is not only being played on country stations but also on classic rock, blues, pop, beach, and multi-genre stations. Women of Substance Radio has picked up a few songs for both it’s Americana show and it’s Adult Contempory show, as well as choosing one for the “What’s On My Ipod” show. I’m really honored about all this. In fact, it is so inspiring to me that I’m starting to dream of another project, but it’s somewhere in the offing.

My dream is to have a little acoustic based band where everybody plays and sings harmony. I don’t really need the whole big band thing. And I definitely want to play in Europe. Everyone there has been so receptive. I’m working towards all this as we speak.

Did I mention I went to see Jackson Browne at the Ryman last night? Well, that was a dose of inspiration. And a great band and opening act.

Soon I will post another list of the community and NPR stations that gave my project airplay. I am very grateful to every single one of them.

It’s a blistering scorcher of a summer in Nashville, and we all need some relief. I hear thunder off in the distance as I’m writing this. Prayers are being answered.

Hey, guys. Feel free to drop me a line here or there. I want to stay in touch!

My CD was released as a project with no singles so that dj’s could choose whatever songs they liked or whatever fit their playlist. So far, all the songs on the album have been selected. Here is a list of some of the radio stations in the US that are playing some of my songs from “The Long Way Around”. I will be adding to the list as I find out more stations have my songs on their playlists or special shows.  This does not include the airplay and shows that have featured me in Europe or Canada. I will talk about those on a future blog. Thanks again to everyone for playing my music!

Wow! The Cd release celebration down at Two Old Hippies was a blast! Sharing the stage with these great musicians and back up singers was such an honor to my songs and I certainly gave it my all! The crowd were a lot of people I know and love, and attentive to the max. There were several Grammy nominated songwriters, a Songwriter’s Hall of Fame songwriter, my co-writers Pat Alger, Marc Rossi, and Daniel Cooper and many long time friends. I wish I could turn around and do it all over again!

Here’s some knock out singers who were either in attendance or doing background vocals for me. I think we could have raised the rafters! Thanks to everyone who came and especially to those who bought my CD. I hope you enjoy! That’s KK Miller, Vickie Carrico, Melanie Rose Dyer and Bekka  Bramlett below. 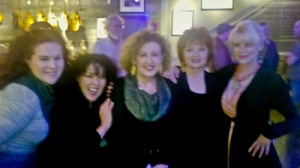 Girls of Heart and Soul

The date for my CD release party is finally here. I’ll be playing at this cool store down in the Gulch in Nashville with some of my favorite and some of the nicest people I know. The fact that they’re just ultra ultra talented too is a real plus. One of my background singers Vickie Carrico(Brenda Lee, Dottie West ) has been doing vocals for people in Nashville for decades and sings with Kentucky Thunder and has done her own rock and blues thing for years. We’ve been mistaken for each other many times as we both have naturally curly hair, but actually standing together (all shortness) of us we only look like distant cousins. Shaun Murphy has been singing bucket fulls of soul year with such people as Meatloaf, Joe Walsh, Eric Clapton and she was with Little Feat for a long time. She has a blues band called The Shaun Murphy Band that plays blues room throughout the country. I was very fortunate to get a couple of guys who played on my album to come out play for the show. They’re busy doing sessions and it’s a great honor to have them and add their flare onto the set. They’ll actually be coming straight from sessions today. We had a great rehearsal last night and I’m looking forward to the combination of vocals and band as we did separate rehearsals. Dave Nelson, the newest transplant to Nashville is on drums and he is a great one. He has played around the world with various artists and is a highly skilled and talented drummer. Mike Durham is playing electric guitar and is from my home state of Virginia. He is a killer guitar player and in demand session player who previously played with the Dave Matthews Band. Mark Prentice is on bass and is not only a superb musician but is such a straight up guy. I believe he was in Hootie and the Blowfish for awhile. I know he moved to Nashville some time ago from Arizona. His whole family is totally talented…a son who is a drummer, a son whose a new little Stevie Ray Vaughan…and his wife sings beautifully too. And last but not least is Scott Saunders on B3 and keyboards. He does his homework and came to town to play with the Sons Of The Desert some time ago. A great guy to work with…I’m really looking forward to casting these songs around this beautiful group of musicians and singers.

I’m watching the progress of “The Long Way Around” and it’s starting to get some airplay at college, community, Internet and international stations in many countries. I appreciate anyone who has bought a CD from CD Baby, downloaded the project from ITunes , played my songs on your station, or bought a CD at a show.

There is an ongoing interview with me this week on East Nashville Radio. Check it out!

Whenever I see the word “journal” I think of my childhood when my mother found my diary and read it. I felt betrayed. I said I would never write in any kind of journal again as it was the kind of things you thought about but didn’t necessarily want to share with everyone.  I didn’t write in any kind of journal again until a few years ago when I started writing in a kind of “notebooking”manner (even then I refused to call it a journal) to try to improve my songwriting skills. It was more of a stream of consciousness exercise. I never really got good at it except in spurts. I really do more of what I call scribbling, which is just scribbling down song ideas.

Yet, in my excitement about sharing my music with you the listener, I am going to do my best to stay in touch. Hopefully, you will get to know me better, and in turn I will soon get to know listeners and fans from all over the world. That, I am truly looking forward to…

The “record” as we say in some circles was released Jan. 15th and is starting to be picked up by Americana , NPR and some college stations. Some of my friends are playing it too. Only kidding. I can’t wait to see everyone at the CD release party at Two Old Hippies in the Gulch in Nashville. It will be about a 40 minute set and I’ll have CD’s on hand to enter into my newfangled “Square” gadget on my IPad. Please come join us and enjoy this wonderful store and venue also!